I Feel So American


The alarm never had to go off Friday morning. My queen size Serta-posture pedic ultra deluxe bed, layered with an extra fluffy yet body molding mattress pad, adorned with1000 thread count cotton sheets, topped with a  goose down comforter wrapped in a gorgeous silky fabric with all my favorite colors felt amazing, but I was too ramped up to remain nestled in place until the alarm went off. I welcomed the energy to pop my body out of bed. You see, for over a week now, I have been clinging to my creature comforts in a way I have never really done before. My bed is my respite, strewn with books, musings on pads of paper, lists of things to do and not do.  My daughter sleeps in my bed when she is home from college, since there is not another bed. Like me, she inherited the "draw of the bed" infinity where the bed is the sacred homing sanctuary. We spend endless hours binging Netflix and eating various forms of salty junk food while crumbs spill positively unnoticed for the moment. My mother was a bed nester as well. She would always have on something incredibly comfortable looking, body wrapped around books and magazines, often falling asleep with a book on her stomach and another turned over on the bed  ready to be picked up and read again when the mood hit her. I am digressing....

I left Nashville Friday and spent the night in Boston. The hotel was comfortable with no less than 9 pillows artistically set at the top of my bed so I could choose what worked best for optimal neck comfort. I set multiple alarms, spreading them around the hotel room, as well as requested a wake up call so as not to sleep through the 4:30 am demand for alertness. The morning went smoothly, except for my inability to get a good cup of coffee before I left the hotel.The only glitch occurred at the airport. I had missed the bag deadline by 2 minutes. The kiosk gave me 2 choices: take a later flight or take carry-on only. Fortunately, I work well in panic situations. Within seconds I formed a plan and made my way to the check in desk, prepared to channel my inner bitch if I needed to call her forward. Either way, the message would be clear,"you will get these bags on that flight, dammit." If there appeared to be any delay in the attendants response, I was ready and willing to raise my voice several octaves, posture myself in a stance of self righteous indignation and self importance, pronouncing (as if everyone should know anyway),"do you have any idea where I am going?" (in that tone that leaves space at the end of the sentence for the unspoken known, like "you idiot." Parents know this tone all too well, especially when spoken from the mouths of teenagers).If that did not work, I would cry and beg.

Its remarkable how quickly one's personality can shift like a toy transformer, morphing in seconds from a kind looking figurine in a fairy tale to an evil warrior with limbs and teeth made of sharp steel! The unfortunate attendant at the ticket counter was about to receive my full force piss-off-ness like she was the cause of my discomfort! Never mind I was the one late...irrelevant in that moment. I acted as if she should stop everything and everyone because I was going to Africa. She was not the surly, short tempered unhelpful character I created her to be in the few seconds it took me to walk from the kiosk to the desk. She was calming. She was kind. She got my bags on the plane.

I sat next to a Tanzanian women with such beautifully rich, smooth dark skin. Her eyes smiled along with her mouth, and she had a laugh that emerged from a place deep down, a place that exuded joy.  Her African accent was thick, and I had to ask her to repeat herself a couple of times.She works for the U.N. and spends much of her time traveling. She offered advice, described places to go and things to do and not do. Seventeen hours is a long time to spend trying to sleep next to a stranger. But for some reason Mariam did not feel like a stranger. In loving words she told me, "In Kenya, it is known that strangers are from God, and should be treated as such." For a brief moment my mind flashed to "the wall" and strangers and God and I noted my sadness.

We landed on a blue clear morning. I took several meditative and deep breaths and thanked God for Mariam, and my journey. My new home. However, my ease evaporated quickly. As we taxied to our gate, I saw a truck of officers wearing fatigues and berets jump out of an open truck, each man bearing a long rifle. They spread out and stood at different points, not just around the plane, but further out towards the runway. Thankfully, no guns were lifted  in a "shoot ready" position. Mariam did not seem surprised or ruffled, nor did her face change from the pleasant affect she had the entire flight. I am sure I appeared visibly shaken, for she smiled and in a soothing voices told me "everything would be OK."She went on to explain that this type of scene not uncommon. She asked if I knew of Boka Horam. I felt a shiver as I remembered things I have read about or seen on the news. She went on, "there has been problems with them, so you will see armed officers especially at airports." As I looked at her, it struck me that this was a common site for her, a common site for many of the people on the plane, even the children. My world is so different. 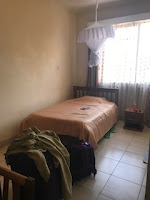 Here is my new nest. I was welcomed to the hostel by Father John, my mentor for the next 2 1/2 months. He hugged me and went to kiss my cheeks, which I think is a custom, but I moved my head too fast and it I ended up giving him a kiss right on the old smacker. Yikes! Not the best way to great a stranger, much less a Catholic priest. I was embarrassed by the gaffe, but he laughed it off in a way that made me comfortable. Exhausted from the journey and parched due to a lack of drinking fluids, Father John showed me my room and  brought me a thermos of water. What was louder, I am unsure. The voice screaming "I am thirsty," or the sirens screaming "don't drink anything but water from a bottle that you opened!" He must have noticed my look of consternation, so he assured me the water was "good water" and no one has ever had a problem from drinking it. Thoughtfully, he asked if  I would like a soda. For a brief second I felt saved. Hydration through soda would work for now. "Do you have a diet coke?" I asked.  He looked at me curiously and took a few moments to process my request.  And in his thick African accent he chimed, "no, but we have "coke regular." I followed him to a small room off the kitchen where, in the far corner, hidden behind some metal containers, was a wooden beverage box (its been years since I have seen one of those) full of dusty glass bottles of coke, fanta orange, and sprite. I grabbed a sprite, dusted off the bottle with my hands and delighted in the thought of a cup of ice to cool my sprite. "We don't have ice," John shrugged. In that unfortunate moment,  I remembered reading that Africans do not use ice. Even in restaurants, when Westerners ask for ice, the waiter may bring a cup with a small piece of ice, delivered with a furrow in his or her brow.
Once back in the room, I ask about the mosquito net hanging above my bed. Briefly, it reminded me of the pretty lace canopy I hung over my daughters bed when she was a young girl. Her canopy had embroidered green, yellow and pink flowers delicately sewn through layers of cascading chiffon and lace that looked like wispy clouds of swirling meringue yumminess. My canopy did not hold the same aesthetics. It had a purpose. John told me I could use it if I wanted to, but its main purpose was to alleviate the fear visiting westerners have of malaria, but it really was not necessary here. Too fatigued to unwind it from the ceiling, I opted to not be a fearful westerner and go net-less. So exhausted, I sipped my warm sprite, opened a couple of windows (after I figured out the latches) and crawled into my bed. It felt deliciously comfortable. I awoke 3 hours later with a mosquito  buzzing around my ear. I jumped out of bed, found my repellant, coated myself from head to foot and attempted to pull down the mosquito net. Obviously I did it wrong. The layers of white netting came down with a crash and stuck to the sticky repellent that had not yet dried on my skin.
Just like when I started graduate school a few years back, ignorant of the ways of being a modern techno-savvy student who did not rely on library catalogue cards, colored highlighters and spiral notebooks and brightly decorated agendas to stay organized, I have a huge learning curve ahead of me!

It is now 1:06 am Nairobi time. Class starts tomorrow morning and I need to rest. I am going to take an ambien, say prayers and send love out into the night air, and rest in gratitude that right now, in this instant, I am alive, well, and have successfully learned how to use the electric socket adapter to charge my phone without having to ask someone else to show me how it is done!